So after I got together all my supplies and decided what to keep or toss, we were ready for the actual Purging of the Toys. The first thing we did was to bring everything down to the basement. Every. Single. Toy.

I can’t believe I’m showing you this:

We brought everything to the basement because 1.) it’s easier to put toys like Legos that seem to escape into every nook of the house back in their rightful places and 2.) sometimes you just get used to something being in one spot. It’s only after you move it and look at it again that you realize you never really used it.

I then made a spot for each kid. After we finished, they took the toys in their spot back up to their rooms. We also have a few “communal” toys like Legos, building blocks and dress-up clothes which have their own spots in the basement. As I picked up a toy, it was either tossed, donated, or put in one of those spots.

The kids were really good about not keeping things they weren’t using. At one point, we had a pile of six baby dolls. I told my daughter she could choose any two to keep and the rest were being donated.

We did the same with purses. For the stuffed animals, I gave the kids a container and told them they could keep as many animals as fit in the box. I think the combination of a little control but definite boundaries worked well for them. They even gave up toys I didn’t ask about.

And now — a glimpse at the results: 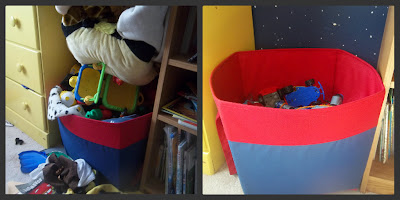 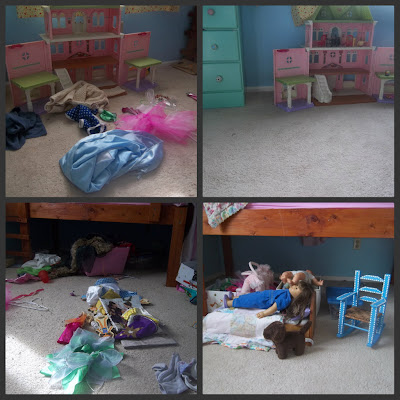 The funny thing is, I bought all these extra storage boxes in case I needed them. Not only did I not, I had extra baskets and boxes because we got rid of so much. It’s been half a week since we did our big purge, and the house is staying cleaner and no one is missing any of the stuff we gave away.

Thank you for visiting Peace but Not Quiet! I’d love it if you’d take a minute to follow me on facebook.

Welcome! I'm Laura -- a mom of four kids aged thirteen and under. I run occasionally and love really bad puns.